With spring finally approaching and horses being turned out to pasture again, we wanted to raise awareness on a couple of plants that are commonly found in pastures (and hay) that can cause issues in the horse.

Please join us over the next few weeks while we go over some of the most common plant toxicities as well as what the signs are and how to recognize the plants. 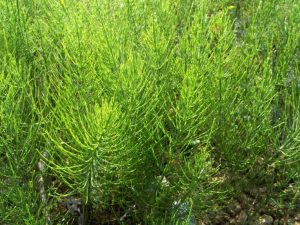 A weed that goes by various different names, mare’s tail, horsetail, bottlebrush or horseweed, is an annually or bi-annually growing weed. It sprouts as a rosette during fall or early spring and sprouts and flowers over summer. It only grows on pastures that are exposed to a lot of sunshine and does not flourish in areas with a lot of shade. It is found mostly on gravelly and wet soil.
It is commonly used as an herbal medicine but can be toxic to your horse, especially when ingested in large amounts. Ingestion typically only occurs when the plant is mixed into the hay.

The reason for horseweed’s toxicity is that it contains the enzyme thiaminase. This enzyme breaks down vitamin B1 (or thiamine) in the body. Vitamin B1 is essential for extraction of energy from carbohydrates, fat and protein. 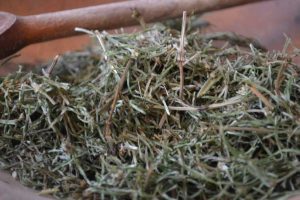 When deficiency of vitamin B1 or thiamine occurs due to the breakdown by the thiaminase contained in horseweed this can cause various clinical signs. The initial signs are usually quite vague: slight weight loss, an overall scruffy appearance and dull haircoat, diarrhea and sometimes slightly uncontrolled movements. With continued ingestion of the weed these signs can progress to loss of muscle control, staggering, ataxia and balance issues. In extreme cases it can even lead to seizures and sometimes death.

Luckily the treatment for horseweed poisoning is easy and highly effective, as long as treatment is initiated early in the disease process. Treatment consists of removal of the weed from the feed and then supplementing thiamine (or vitamin B1) to correct the deficiency caused by the thiaminase. Thiamine is administered in the muscle for 4-5 days to help restore the normal values and improvement of the symptoms can be seen after 1 or 2 treatments.